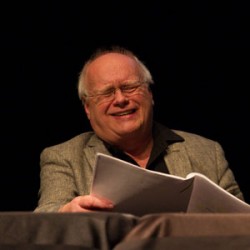 The DC Shorts Screenplay Competition is a very different kind of screenwriting competition. A panel of judges consisting of filmmakers, screenwriters and critics reviewed over 145 screenplays — and selected the top 6 to be performed for you! After a table reading, the audience will vote for their favorite, and one lucky writer will walk away with $2,000 to shoot their project! The completed film will screen at DC Shorts 2015.

While the votes are counted, we will screen The Goblin Baby by local filmmaker Shoshana Rosenbaum. Her script was a runner up in the 2013 Screenplay Competition. More information on the film is available here.

Meet all of the writers after the reading at the complimentary wine and cheese reception hosted by the Irish Dairy Board and Barefoot Wines.

Tickets for this event are very limited.

BreakIn(g)
David Feehan, St. John’s, Newfoundland
A testy man and his confused mother deal with a charming robber in their house.

The Cookie
Marco Walls, New York, NY
An old man discovers the best and worst in people just through a bag of cookies.

Parallel
Phoebe Bradford, Brooklyn, NY
A native Brooklynite is challenged by the changing neighborhood when her favorite bodega is closed.

Explore the website, watch trailers, read about films — then join us for 11 days this September.